We are proudly undertaking yet another restoration in a heritage building located in a historic area of Victoria. This time is a marvellous 1903 jewel is Chinatown, situated right next to the Chinese Public School (also on the Heritage registry, and a building that has been entrusted to our skilled crew as well.) 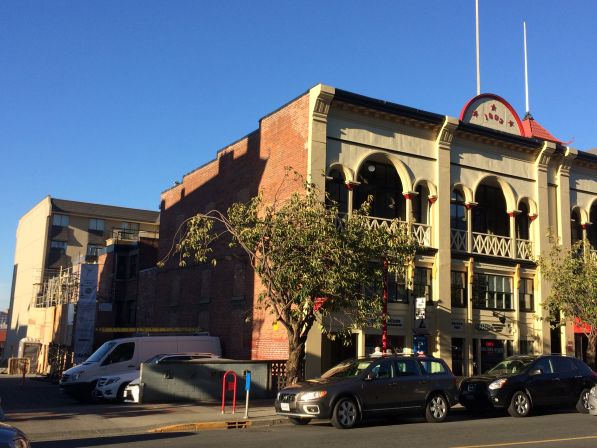 The Gee Tuck Tong Benevolent Association Building is a fundamental part of the group of early buildings that define the historic character of the Chinatown in Victoria, one of the few in North America to retain significant clusters of valuable heritage and historical buildings. Victoria’s is Chinatown also notable as the oldest Chinatown in Canada and only second in North America to San Francisco’s. 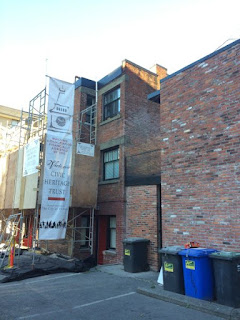 In 1995 the entire district was designated a National Historic Site of Canada, but the heritage character and importance of this particular property had been formally recognized by the Canadian Register of Historic Places in early 1992.

The building was built in 1903, design for retail stores at street level and the association rooms above with a narrow passage to a tenement at the back. (The photography on the left shows the Scaffolding setup against the wall of the tenement area). The entire structure of the building speaks of an era where the area’s budding population was struggling to retain its roots and identity, while incorporating themselves to the nascent western Canadian way of life.

Once again, we found ourselves immersed in a project that brings us to the very roots of what means, in historical terms to be a Victorian. A project that really challenges our pride in our craftsmanship and our skills to perform to do sensitive masonry repairs on historical buildings. How can we not love this job?

Giving Back To Our Community

We're actively involved in a number of community projects here and abroad, including:

What Our Customers Say

We had exceptional service from Rob Tournour Masonry. Our previous fireplace was dismantled and restructured as cleanly and orderly as possible. The completed stonework is a piece of art in its uniqueness. We found the staff to be highly skilled, energetic, and conscientious. Their pride of workmanship shows in the results. We love our fireplace! Thank you guys…you are a great team! Will send a picture when the house is completed.

I cannot say enough good things about this Rob Tournour Masonry Ltd! From start to finish, my experience with them has been excellent…I have no hesitation in recommending this company to anyone needing masonry services….